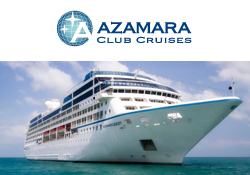 Azamara Club Cruises is a subsidiary cruise company of Royal Caribbean Cruises which was founded in 2007 as Azamara Cruises and was rebranded in 2009 and both ships were refurbished in early 2016. This company operates two ships named Azamara Journey and the Azamara Quest.

At Azamara the world is your oyster which comes with internationally acclaimed ships ready to take you to some amazing destinations of the world, upon arrival on the ship you will find things in port would not find on other ships. No matter where you would be in the world but always you will enjoy an unmatched amenities with us.

Below is the departure port from where it will depart:


Port of Countries where the Cruise will Docked:

Carnival Cruise Line Originally an independent company founded in 1972 by Ted Arison is an American owned cruise line. The company has nine cruise ships with 24 vessels currently in operation which are under the control of Carnival Corporation.

Carnival cruise line is limited series of special sailing destinations, authentic seats, local entertainment, throwback sea day, academy of fun, crew connections and much more. A carnival cruise is a great way to explore new destinations, places and new things and there is no substitute of carnival live which brings entertainers you know, like some musicians and comedians.

Norwegian Cruise Line was founded as Norwegian Caribbean Line in 1966 by Knut Kloster and Ted Ariso. The company is best known as for its Freestyle Cruising concept, which means that there are no set times or seating arrangements for meals, nor is formal dress required.

Norwegian Cruise Line is in cruise travel with a 49-year history and breaking the boundaries of traditional cruising, most notably with the introduction of Freestyle Cruising and by giving guests freedom and flexibility to design their memorable cruise vacation.

Royal Caribbean International cruise line founded in Norway but based in Miami Florida USA. It was found in 1968 by three Norwegian shipping companies: Anders Wilhelmsen & Company, I.M. Skaugen & Company, and Gotaas Larsen. The cruise has many on board activities as climb higher than ever on the rock wall, and even ice skate your way across the Caribbean, casino royal, show and night life, celebration and gift and much more.

Star Cruises was founded as an associate of the Genting Group of Malaysia, is the third largest cruise line in the world after Carnival and Royal Caribbean and dominates the Asia pacific market, its headquarter is in Hong Kong. The ships are equipped with comprehensive meeting facilities and modern and uninterrupted breakout rooms and trained staff to provide super warm hospitality to make sure your memorable cruise experience.